Dr. Delaney is now a robotic surgeon certified by MAKO. Ask us about our results using this innovative surgical device.

Dr. Terence Delaney is a Los Gatos, CA-based orthopedic surgeon who specializes in joint replacement and sports medicine. Committed to the latest surgical and minimally invasive techniques, Dr. Delaney strives to get his patients back to the activities they love.

Talk about good, clean fun! I do not recognize these NYC playgrounds!!

THE KEY TO DOING WELL IN A PULL-UP CONTEST is rhythm. Let the body set the tempo: the downbeat of the chin clearing the bar, the kick drum of tension in the shoulder blades. Keep that beat, that timing, until weariness sets in.

Healthful eating and exercise might lower dementia risk in those who are genetically predisposed to developing Alzheimer’s disease.

A healthy lifestyle might reduce the risk for dementia, even in people with a high genetic risk, new research suggests.

I wrote last week about finding ways to make sure that sports participation stays fun for kids, so they can enjoy the benefits of physical activity and fitness. Keeping the body healthy and active has psychological benefits as well, and a new study suggests that organized sports participation may be helpful for kids who are dealing with childhood trauma.

A New Approach to Hip Surgery

Some surgeons say anterior hip replacements, in which the incision is made at the front of the hip instead of through the buttocks or the side, result in decreased pain and faster recovery.

PRP is an abbreviation for Platelet Rich Plasma. Plasma is what's left when blood cells are separated from the liquid component of human whole blood. The plasma portion contains numerous biologic factors that have been shown to enhance healing in animal and human studies. Some of this work dates back to the early 90's. Clotted whole blood has been used and studied for improving the success of meniscus cartilage repair in the knee joint of humans since that time.

A Promising Treatment for Athletes, in Blood: 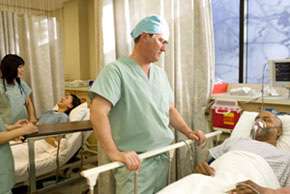 Two of the Pittsburgh Steelers' biggest stars, Hines Ward and Troy Polamalu, used their own blood in an innovative injury treatment before winning the Super Bowl. At least one major league pitcher, about 20 professional soccer players and perhaps hundreds of recreational athletes have also undergone the procedure, commonly called platelet-rich plasma therapy.

Experts in sports medicine say that if the technique's early promise is fulfilled, it could eventually improve the treatment of stubborn injuries like tennis elbow and knee tendinitis for athletes of all types.The method, which is strikingly straightforward and easy to perform, centers on injecting portions of a patient's blood directly into the injured area, which catalyzes the body's instincts to repair muscle, bone and other tissue. "Most enticing, many doctors said, is that the technique appears to help regenerate ligament and tendon fibers, which could shorten rehabilitation time and possibly obviate surgery". Two of the Pittsburgh Steelers' biggest stars, Hines Ward and Troy Polamalu, used their own blood in an innovative injury treatment before winning the Super Bowl.

Research into the effects of platelet-rich plasma therapy has accelerated in recent months, with most doctors cautioning that more rigorous studies are necessary before the therapy can emerge as scientifically proven. But many researchers suspect that the procedure could become an increasingly attractive course of treatment for reasons medical and financial. "It's a better option for problems that don't have a great solution — it's nonsurgical and uses the body's own cells to help it heal," said Dr.Allan Mishra, an assistant professor of orthopedics at Stanford University Medical Center and one of the primary researchers in the field. "I think it's fair to say that platelet-rich plasma has the potential to revolutionize not just sports medicine but all of orthopedics. It needs a lot more study, but we are obligated to pursue this."

Dr. Neal ElAttrache, the Los Angeles Dodgers' team physician, used platelet-rich plasma therapy in July on a partially torn ulnar collateral ligament in the throwing elbow of pitcher Takashi Saito. Surgery would have ended Mr. Saito's season and shelved him for about 10 to 14 months; he instead returned to pitch in the September pennant race without pain. Dr.ElAttrache said he could not be certain that the procedure caused the pitcher's recovery — about 25 percent of such cases heal on their own, he said — but it was another encouraging sign for the nascent technique, which doctors in the field said could help not just injuries to professional athletes but the tendinitis and similar ailments found in the general population.

"For the last several decades, we've been working on the mechanical effects of healing — the strongest suture constructs, can we put strong anchors in?" Dr. ElAttrache said. "But we've never been able to modulate the biology of healing. This is addressing that issue. It deserves a lot more study before we can say that it works with proper definitiveness. The word I would use is promising."

Platelet-rich plasma is derived by placing a small amount of the patient's blood in a filtration system or centrifuge that rotates at high speed, separating red blood cells from the platelets that release proteins and other particles involved in the body's self-healing process, doctors said. A teaspoon or two of the remaining substance is then injected into the damaged area. The high concentration of platelets — from 3 to 10 times that of normal blood — often catalyzes the growth of new soft-tissue or bone cells. Because the substance is injected where blood would rarely go otherwise, it can deliver the healing instincts of platelets without triggering the clotting response for which platelets are typically known.

"This could be a method to stimulate wound healing in areas that are not well-vascularized, like ligaments and tendons," said Dr. Gerjo van Osch, a researcher in the department of orthopedics at Erasmus University Medical Center in the Netherlands. "I call it a growth-factor cocktail — that's how I explain it."

Dr. van Osch and several other experts said they had used the procedure as a first option before surgery for reasons beyond its early results. There is little chance for rejection or allergic reaction because the substance is autologous, meaning it comes from the patient's own body; the injection carries far less chance for infection than an incision and leaves no scar, and it takes only about 20 minutes, with a considerably shorter recovery time than after surgery.

Because of those apparent benefits, the consensus among doctors is that the procedure is worth pursuing. However, several doctors emphasized that platelet-rich plasma therapy as it stands now appeared ineffective in about 20 to 40 percent of cases, depending on the injury. But they added that because the procedure costs about $2,000 — compared with $10,000 to $15,000 for surgery — they expected that with more refinement, insurance companies would eventually not only authorize the use of PRP therapy but even require it as a first course of treatment.

The Signature™ system utilizes custom femoral (thighbone) and tibial (shinbone) positioning guides that fit directly onto your unique anatomy. These guides position the implants without having to use traditional invasive instrumentation, allowing for a potentially less invasive procedure.

An exciting new alternative to total hip replacement is now available right here. This technologically advanced surgical procedure resurfaces rather than replaces the end of your femur (thighbone), you may participate in more strenuous physical activity with an implant that is potentially more stable and longer-lasting than traditional total hip replacements. And if future revision surgery is required, it may be a less complex and less traumatic procedure. In fact, a 1,626-hip study of the effectiveness of the technique found that 99.5-percent of patients responded they were "Pleased" or "Extremely pleased" with the results of their BIRMINGHAM HIP Resurfacing surgery.

Although a total knee replacement is the most common procedure, a less invasive approach, such as the Oxford® Partial Knee, may be more suited to your needs. If you are still at the early stages of your osteoarthritis, so only parts (normally the medial, 'inner', compartment) of your knee have been damaged by the disease, you may be able to prevent it from spreading, and avoid having to undergo a total knee replacement. This procedure preserves the healthy parts of the joint, as it only replaces one side of the knee. This results in an artificial joint with a function that is closer to the natural knee movement. 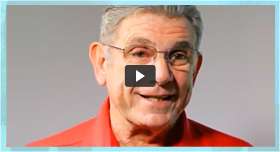 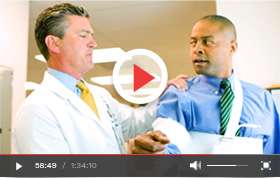